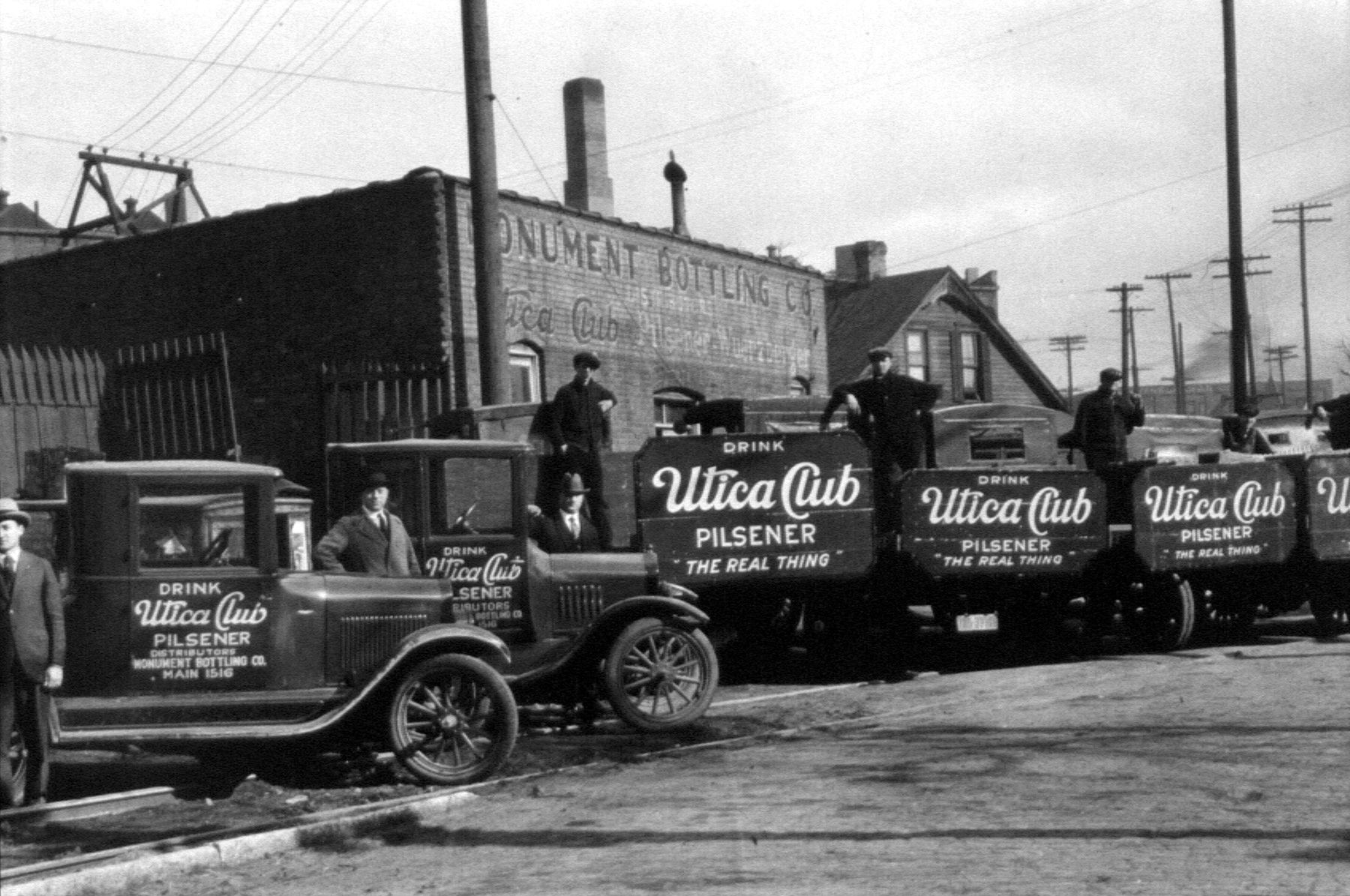 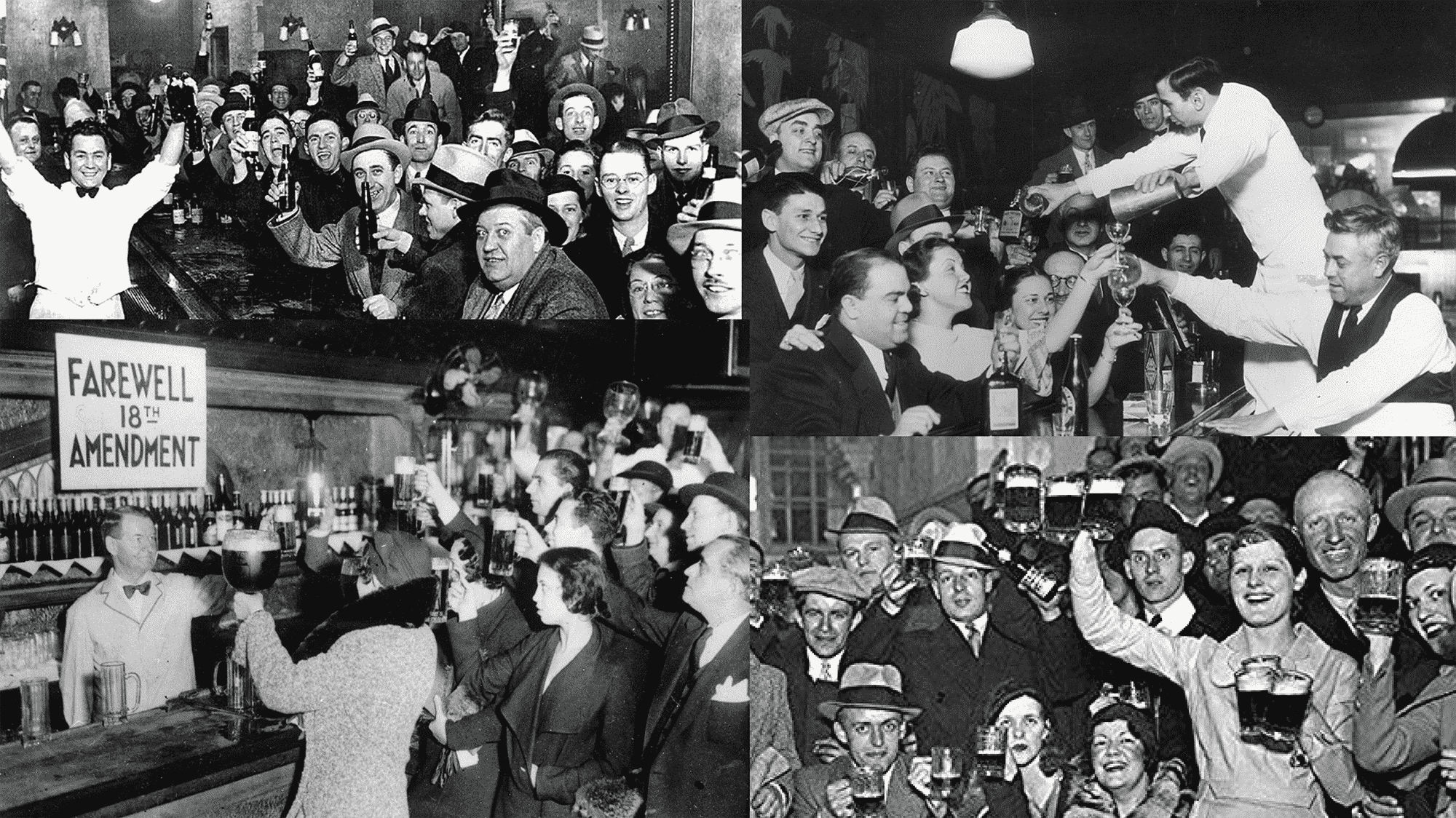 Celebrating the repeal of the 18th Amendment. (Image source unknown.)

On this day in 1933, the 21st Amendment was passed, marking the end of prohibition. People all over the country celebrated the glorious victory.

We recently interviewed Fred Matt, the President of F.X. Matt Brewing Company, to hear the story of how his family’s brewery in Utica, NY was the first in the country to obtain a license and pour the first legal beers post-prohibition.

In 1878, Fred Matt’s Great Grandfather, Francis Xavier Matt (F.X. Matt I) immigrated to the United States from Germany. Matt was the student of the Duke of Baden Brewery, and was considered a proficient brewer upon his arrival to the states. He began working as a salesman and brewmaster for The Charles Bierbauer Brewery in Utica. In 1888, he purchased the brewery from the Bierbauer family and founded The West End Brewing Company. Matt became a very successful businessman. In addition to owning a successful brewery, he also owned The Hotel Utica, Utica Cutlery, and The First National Bank of Utica. 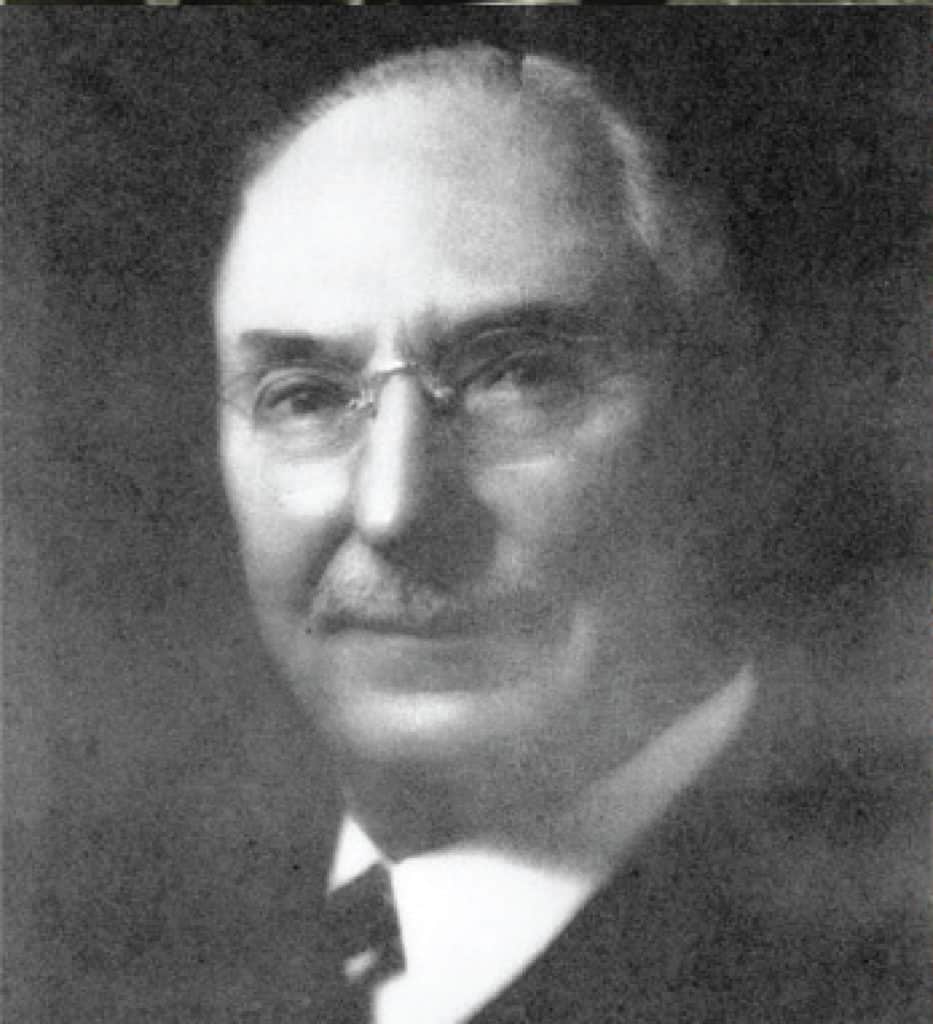 For 13 years, it was illegal to brew, sell, and consume alcohol in the United States. The West End Brewing Company was one of the few breweries in the US to survive prohibition finding ways to keep operating.

“My great grandfather lived by the letter of the law. At the time of prohibition German immigrants, especially beer barons, were thought to be German spies. He did not want to give anybody any reason to try to take what he had worked hard for,” says Fred Matt.

His great grandfather managed to keep the company running by producing non-alcoholic soft drinks and malt tonic under the brand name Utica Club. He personally financed the company out of his own pocket.

“It’s pretty cool that during prohibition he kept everyone working. They had families too and they needed to live. That has kind of fostered our sense of community and family as a company. Always do the right thing, whether it costs you or not, do the right thing.” – Fred Matt

At the same time, their loyal following of beer patrons remained close to heart. A disclaimer on the label of their malt tonic read, “Caution: Do not ferment, do not add yeast, or you will create beer.” Essentially, telling customers how to make beer.

THE REPEAL OF PROHIBITION

December 5th, 1933, will forever be marked as the day prohibition was repealed. West End Brewing Co. was the first brewery in the country to have a license, and the first to legally sell beer.

“There was a big parade that started at the brewery and ended at the Hotel Utica where people enjoyed pints of the first legal beer to be poured in the country, Utica Club,” said Fred Matt.

F.X. Matt’s brother, Frank, was in Washington D.C. at the time of the repeal. Fred told us that “My great Uncle Frank spent a ton of time in Washington D.C. lobbying the government to repeal prohibition. When it was finally successful, he was there. That’s how we got the first license to brew beer after prohibition.”

Upon repeal of prohibition Matt (I) sent out a letter to distributors stating, “You may have your trucks here at our premises, midnight, December 5th, and you can receive all the beer you desire at 12:05 A.M. December 6th.” 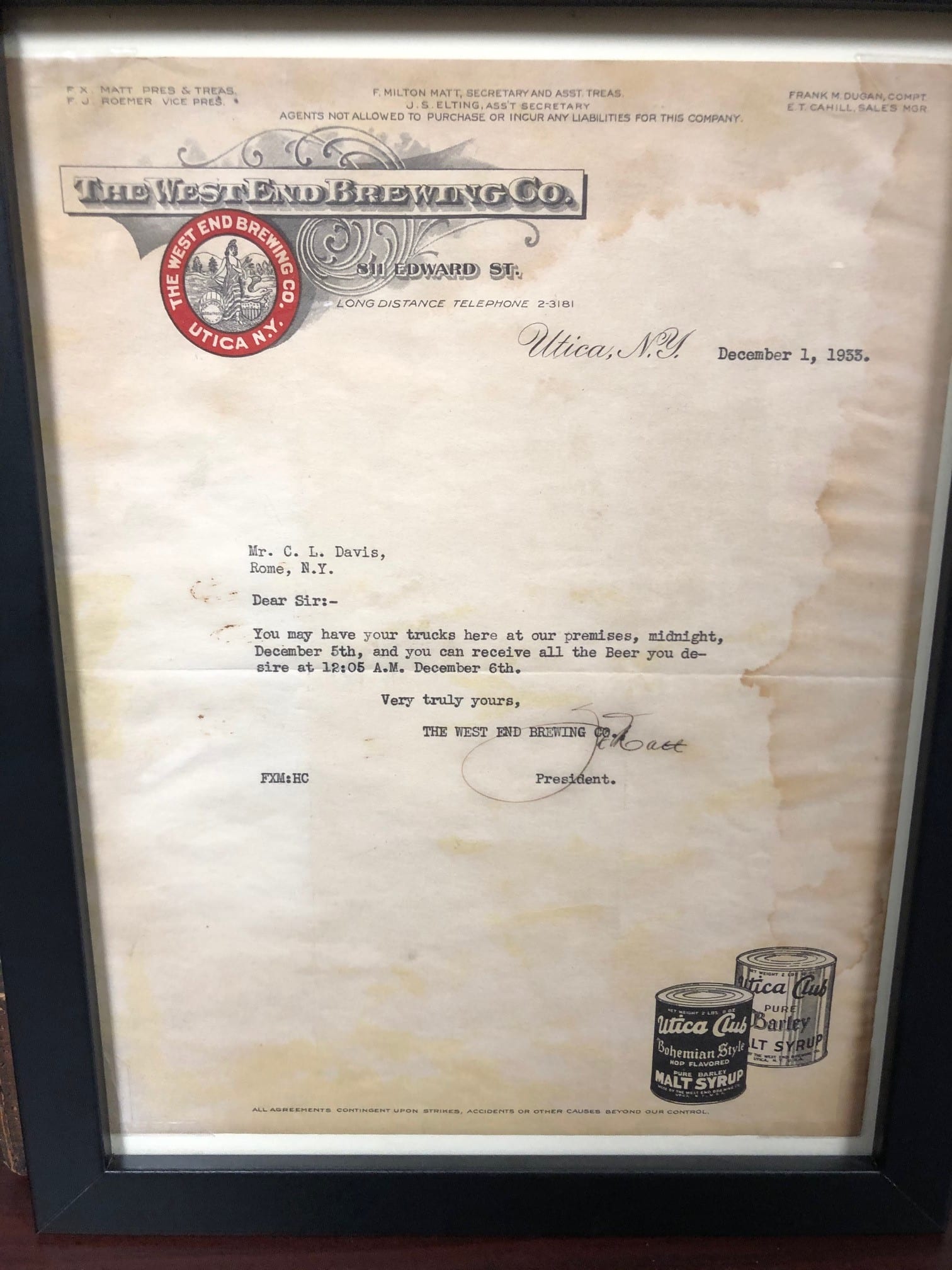 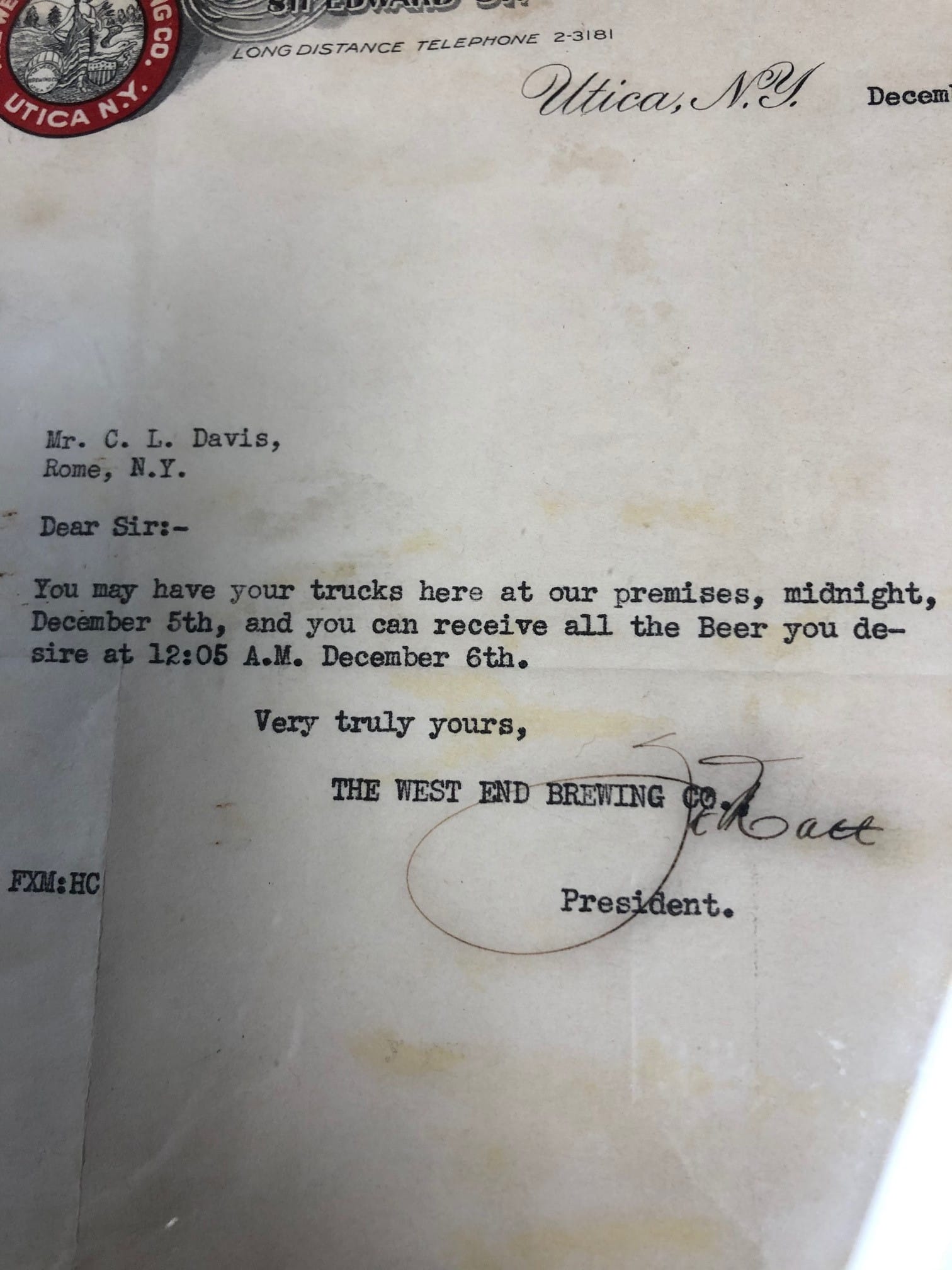 There’s no question that Utica club has stood the test of time. More than 85 years later, Utica Club is still brewed and beloved today on draft and in cans.

Utica Club has claimed numerous medals over the years. Most recently, it was awarded a bronze medal at the 2019 New York State Craft Beer Competition and received a standing ovation by NYS craft industry spectators at the award ceremony. 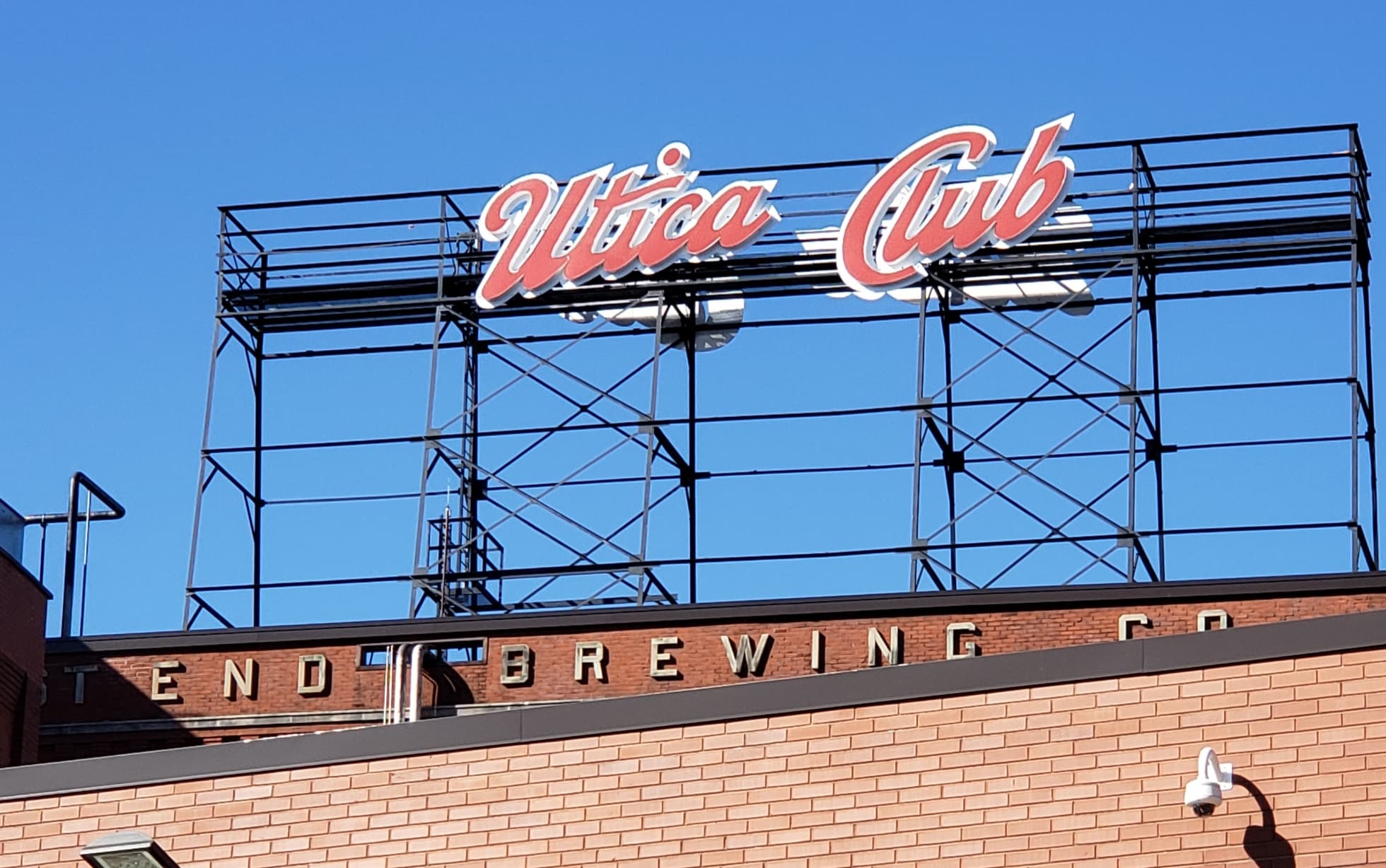 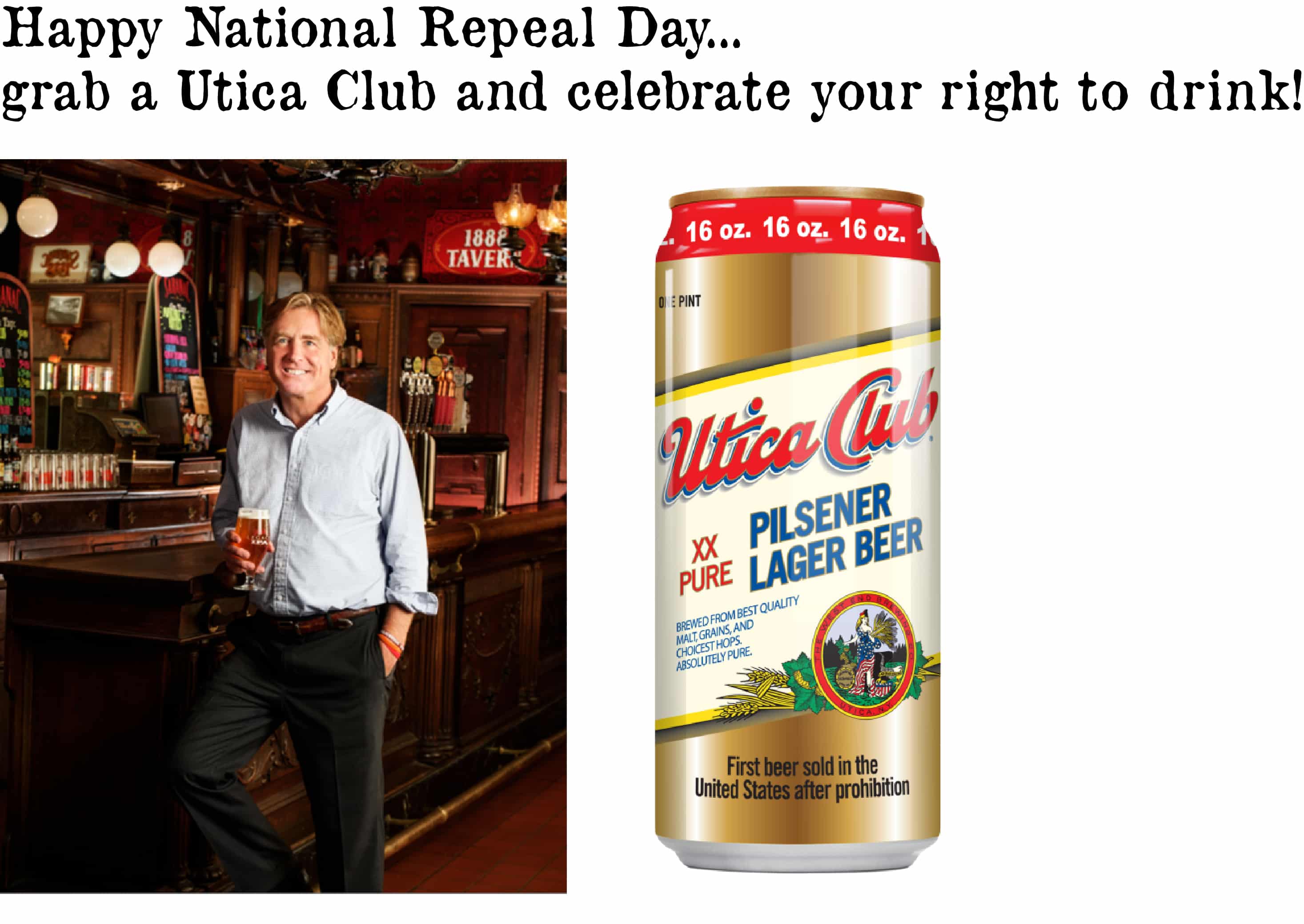